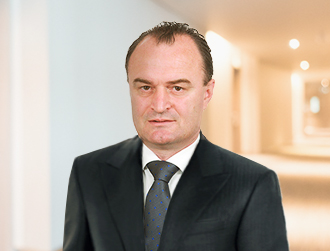 Successful entrepreneur with over 25 years of visible achievements in business development and growth. A major investor in the development of seaports such as the Mediterranean, the Black Sea and the Adriatic. He has led various projects in Europe, in areas such as: infrastructure, manufacturing, mining, service centers, etc., with monetary values ​​up to 800 million euros.

Mr. Lekaj has completed his studies in economics at the University of Tirana, while he has completed his Master studies in the Netherlands in the field of procurement. Has lived in the Netherlands since 1991. Also, Mr. Lekaj is an activist and supporter of Albanian communities abroad. Co-founder of the Dutch Albanian Foundation. In addition to owning various companies, since 2007 he is part of the Supervisory Board of Dutch and Belgian companies.

Having a continuous commitment in support of his country, abroad, Mr. Lekaj received the honorary title “Ambassador of the Nation” and in 2019 he is elected one of the 15 members of the Coordinating Council of the Albanian Diaspora.

Supporting legislation of the Albanian Diaspora Chamber of Commerce

I want to be informed through the newsletter

Your ticket for the: Ardian Lekaj